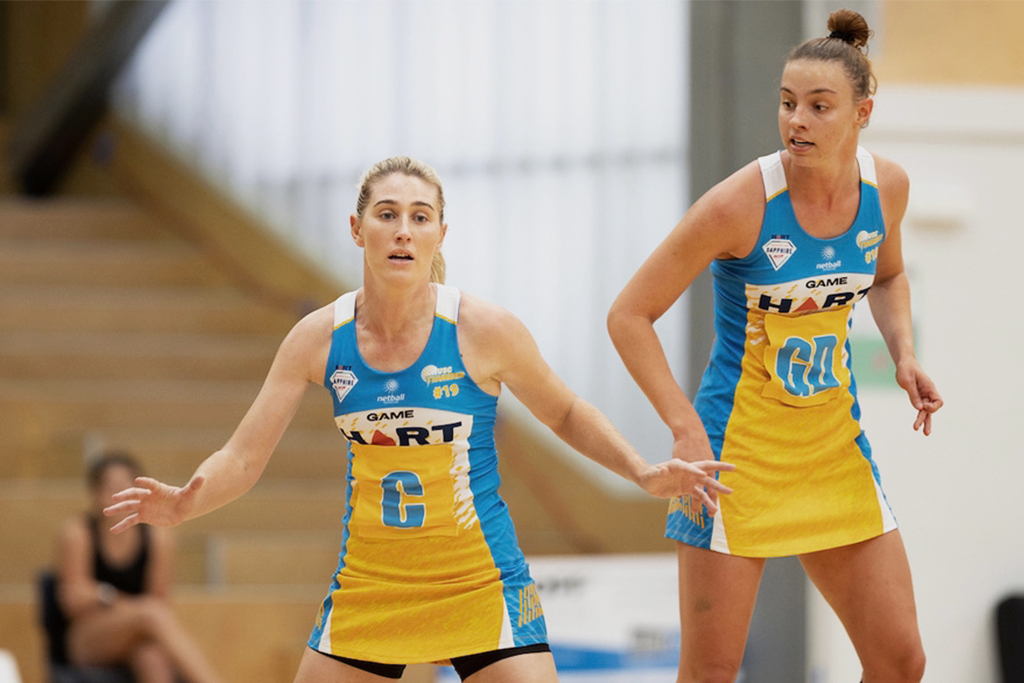 QUT started the match with a missed goal less than a minute in, with Woolnough intercepting gaining possession of the ball for thunder. This play led to Thunder Goal shooter Bingham to get the first goal of the game and her first goal in her first starting game of the year. Thunder started the next set letting Bingham to get another goal seconds after her first. A few goals later, French makes an amazing intercept near QUT’s shooting circle, gaining possession of the ball once again, leading to Lawrie’s first goal of the game. A held ball by Lawrie gives the ball back to QUT, however Thunder intercept it straight back and Bingham scores her fourth goal. Woolnough went off after a falcon to the head and being checked by the physio. After Thunder being up six points, QUT gained some momentum getting the margin back to one. Lawrie responded by scoring one, and Bingham scoring another off an intercept right after. QUT fought back, leading by one point by the end of the first quarter.

After both French and Woolnough went off for ankle injuries towards the end of the first quarter, Metcalf is subbing for French whereas Barnett for Woolnough. The second quarter started with an intercept by Thunder’s goal defence allowing Bingham to score in the first minute and two more a few minutes later. Intercepts left right and centre for both teams, neither being able to score for a minute or so, until QUT scored their second for the quarter. French comes back into centre position after five minutes had passed in the second quarter. Bingham gets Thunder back to a one point margin behind QUT. Lawrie finally gets her first goal of the quarter six minutes in. Bingham and Lawrie go back to back to gain a one point lead on QUT. After lots of back and forth between the two sides, Thunder unfortunately just falls short, trailing by one point at half time.

Bingham scores the second goal of the third quarter a minute into the game, however, seems lack lustre as QUT secure a six point lead over Thunder. Thunder promptly called a timeout to regroup about four minutes into the quarter, which allowed Bingham to score the second goal for Thunder. After another Bingham goal, Lawrie gets her first goal of the quarter, although Thunder still trail by 8. Both Bingham and Lawrie are starting to miss shots, allowing QUT to further dominate in this quarter through intercepts and numerous consecutive goals. Thunder falls behind for the third quarter, the margin being sixteen points.

The last quarter of the game starts strong for Thunder, with an intercept on an attempted QUT goal leading to two goals for Bingham in the first few minutes. Lawrie followed up with a goal of her own after QUT has only scored one so far. She scored another two consecutive goals. Thunder’s momentum is slowing increasing set to possibly turn the tables of the game. The shooting duo for Thunder has brought the points margin back to eight points with six minutes to go. Litherland was carried off by teammates minutes before the end of the game with a left ankle injury. After a gritty last quarter, Thunder fought hard but just missed out on the win, losing by nine points to QUT, however won the quarter in a dying effort to come back. Next week is Indigenous round for the Sapphire series, where fourth place Thunder will go against eighth place Mendi Rays at Nissan Arena at 10:00am on the 30th of May, you won’t want to miss it.