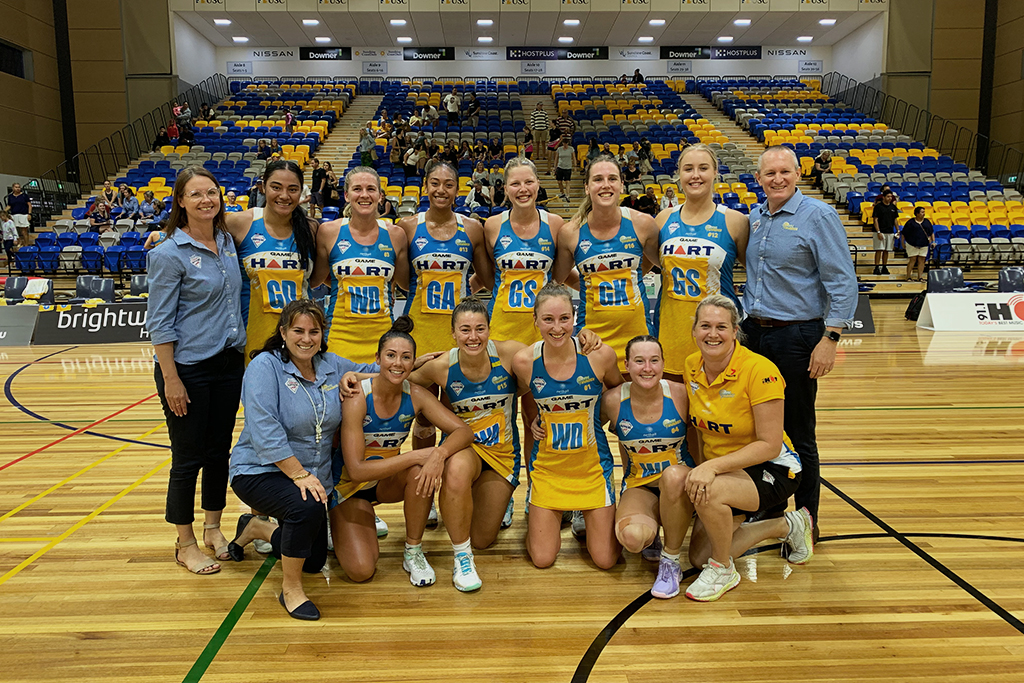 This past weekend saw a double header in the HART Sapphire Series, with round 9 taking place on the Saturday followed by round 10 on the Sunday.

USC Thunder entered the weekend in phenomenal form, defeating the defending champions the Wildcats in round 7 before taking the scalp of the top of the table Cougars in round 8.

Thunder had the first centre pass and scored five goals in a row before the Tigers coach called an early timeout after less than four minutes. Tigers make a comeback to even the scores up at 6-6 before Thunder stretch back out and claim the first quarter 17-10. A second impressive quarter by Thunder saw them claim the second available bonus points by 8 goals, with Ash Unie in particular playing exceptionally. They entered the major break up by 15.

The second half was a far closer affair, with Thunder claiming the third quarter by only three goals before falling three goals short in the fourth. The girls took a 15-goal victory and claimed three quarter victories to lock in a semi-final appearance.

Round 10 saw Thunder take on the Bond University Bullsharks in the battle of the coasts. Thunder made a few changes to their round 9 team, with Wilshier starting at WA, Litherland at C, and Lily-May Catling re-joining the team in WD.

The first quarter started as a close battle as the two sides took turns at holding the lead. Thunder’s defensive performances however saw the USC side stretch out towards the end of the quarter and claim the first bonus points by 5 goals. The Bullsharks started the second quarter impressively, scoring the first two goals before three by Lawrie returned the advantage to Thunder. Bullsharks called a timeout with seven minutes to go before the sides battled their way to a drawn quarter. The sides shared the bonus points, but Thunder held a 5-goal lead at half time.

Thunder had the centre pass for the third quarter and scored three consecutive goals to claim the advantage. Bullsharks scored a couple to reduce the margin, but Thunder then settled in after missing a few goals and enter the final break with a 10-goal lead after claiming the quarter by 5. The rivals went goal for goal throughout most of the final quarter as the margin floated at around 10 goals for several minutes. Thunder called a timeout with about 7 minutes to go as the Bullsharks had been holding the quarter lead most of the time since the break, but a strong finish by Thunder saw USC claim the quarter by three goals and take a 13-goal victory.

All the girls played exceptional netball over the weekend, with Unie and Woulf particularly strong as they lead from the back. Lawrie, Hunt and Bingham shot well both days whilst Chloe Litherland was my player of the double header after another strong performance through the middle.