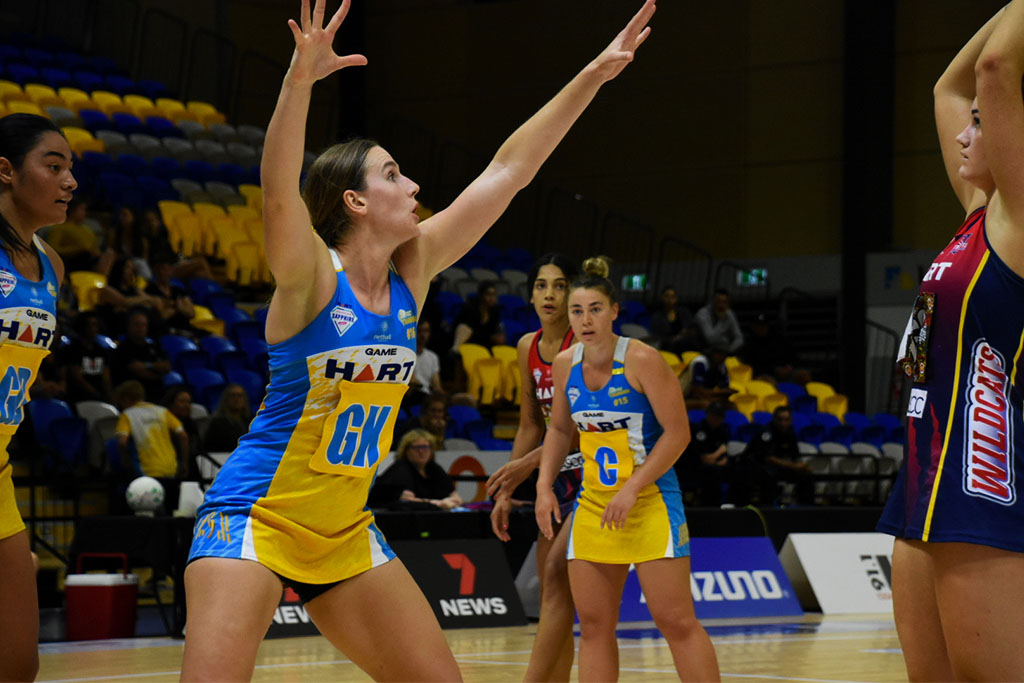 Round 7 of the HART Sapphire series has come and gone, and this past weekend saw the USC Thunder host defending champions, the QUT Wildcats. Thunder had most recently come away with a loss against the Jets in round 6 and would have really enjoyed the week off to recover. Chloe Bingham once again started at GS, Annie Lawrie at GA, Ali Wilshier at WA, Chloe Litherland at C, Ash Unie at WD, Sarahpheinna Woulf at GD, and Adrienne Keefe at GK.

Thunder had the opening centre pass of the game and scored first through Bingham. The Wildcats may be the defending champions, but Thunder showed more energy early on and ran away to an early 6-3 lead.  The Wildcats fought back to draw even, and after a couple more goals each way, that’s how the first quarter ended. Both teams scored a bonus point each as they entered the first break 9-9. The second quarter started with Wilshier moving to C, Litherland to WD, and Hungerford on at WA. Thunder scored first and drew ahead numerous times through the period. Thunder’s passing and defence was exceptional, however missed opportunities under the net made it difficult to stretch ahead. Thunder were holding on to a draw deep into the final minute, however Wildcats scored late to claim the bonus points and a 1 goal lead at the major break.

Wildcats had the centre pass to start the second half, however Woulf forced a turnover which resulted in a Bingham goal, shortly followed by a second. Thunder backed it up with a second straight turnover and a third consecutive goal. Ash Unie forced yet another turnover, making it three times in a row that Thunder broke the Wildcats centre pass to start the quarter. Thunder were showing energy and aggression unlike what we’ve seen of them all season. Unie, Keefe, Woulf and Litherland were all over the Wildcats offence whilst the girls up front were troubling their defence. Wildcats went on a small run as they scored three in a row to draw level, however yet another Litherland intercept allowed Thunder to return to the front foot. Goals to Lawrie and Bingham toward the end of the quarter saw Thunder claim the bonus points and held a two-goal lead into the final break. Wildcats opened the fourth quarter with the centre pass and two consecutive goals. Keefe forced a turnover to avoid falling behind, which allowed Lawrie and Bingham to take advantage with goals of their own. Wildcats called a timeout with 9 mins to go, but it achieved little as Lawrie scored three in a row to stretch Thunder’s lead to six goals. Wildcats then scored three of their own before Thunder responded with a timeout. Impressive end to end Netball saw Thunder move six goals ahead in the closing stages of the game with yet another Keefe forced turnover sealing the victory. Thunder won the game by six goals and claimed the final bonus points after taking the final quarter 13-11.

Thunder played an excellent game of netball against the Wildcats. Taking away the win and five bonus points against the reigning champions is no mean feat and something the girls will be proud of. Litherland in particular was exceptional in her cameo at WD, whilst Ruby player Lily McClure also got a run towards the game in what was her Sapphire series debut.

Coach Garry Pashen said after the game that it wasn’t just the final score that impressed him, but the way the girls took what they had done at training and incorporated it into their game.

“But what I’m probably more pleased about is the things that don’t get measured on the scoreboard.

“Their performance was the main thing, and obviously the scoreboard then took care of itself.”

Round 8 in a fortnight will see the Thunder take on the top of the table Cougars, a challenge that defensive star Sarahpheinna Woulf is excited to embrace.

“We didn’t start off as well as we wanted to, but we are performing right now,” Woulf said.

“I think if we trust in each other and keep building each week then they better watch out, you never know who we are going to be coming for.”

The Thunder now have a week off before facing the Cougars at USC Stadium on Saturday October 24 at 5pm.