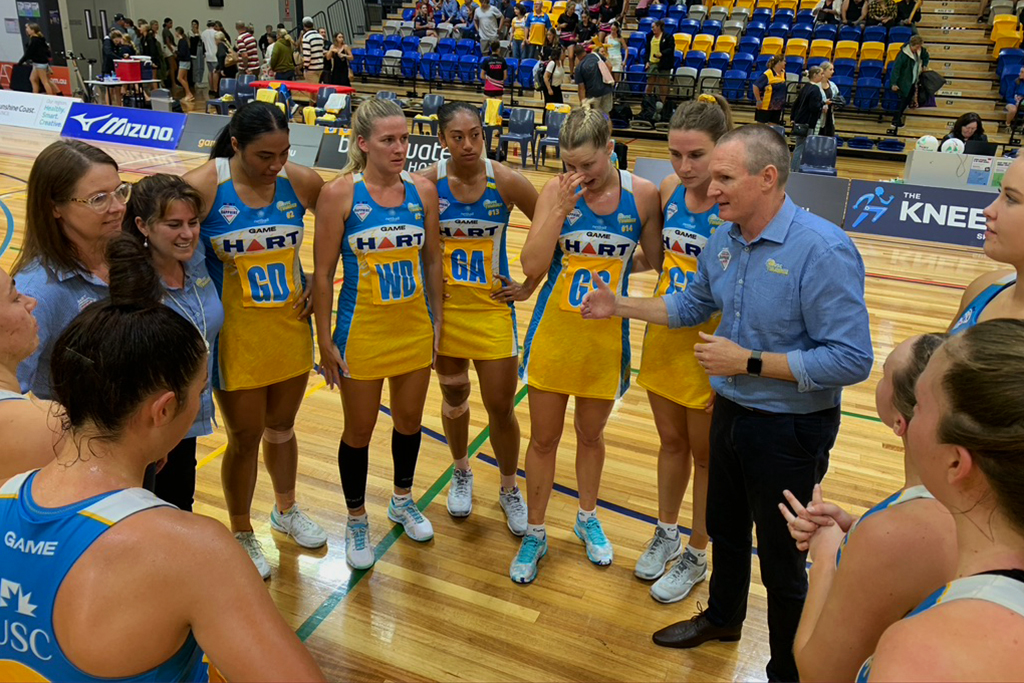 Round 8 of the Hart Sapphire Series saw the in-form USC Thunder face the undefeated Brisbane North Cougars at USC Stadium. Thunder were fresh off the back of their victory over reining champions the QUT Wildcats and entered the match against their far more fancied opponents filled with confidence.  Sarahpheinna Woulf started the match at GK, Lily-May Catling returned from injury to start at GD whilst captain Ash Unie started from WD. Ali Wilshier started at C, Josie Hungerford at WA, Binnian Hunt at GA, and Annie Lawrie was GS.

Cougars got off to a flying start, scoring first before pushing out to a 5-goal lead within minutes. Thunder recovered from their poor start, dragging the gap back to zero with little time remaining. Lawrie scored late in the quarter to claim the first period 14-13, taking the bonus points after an impressive early turnaround. Hunt scored Thunders first goal of the second quarter. A Woulf intercept allowed Lawrie to score and extend Thunders lead to three goals. Some Cougars pressure saw them even up the score as Thunder conceded three in a row. Thunder then increased their intensity, forcing multiple turnovers and stretching out to a 5-goal lead. Cougars called a timeout with four minutes to go in the half, but it made no difference to Thunder’s momentum as they extended their lead by three more, claiming the quarter by seven and holding an eight-goal lead at the major break. A massive effort by the underdogs.

Cougars scored first to start the second half, but their offence continued to be dismantled by the impressive defensive efforts of Catling, Woulf and Unie, with Lawrie even recording an intercept early on. Thunder were being a little careless with some of their passing decisions, which allowed Cougars to close the gap, but further forced turnovers by Woulf allowed Lawrie and Hunt to take advantage. Thunder steadied late to hold a six-goal lead heading into the final break despite missing out on the bonus points by two. Thunder scored first in the fourth quarter followed by a frenzy of quick plays in both directions. Hunt and Lawrie were both impressive when shooting and continued their good form late in the game. Forced turnovers by litherland and Woulf continued to provide opportunities to Thunder down court. Thunder called a timeout with seven minutes remaining after absorbing a high energy offence for several minutes. Thunder continued their phenomenal defence as the share the bonus points in the final quarter and claim an impressive six goal victory.

Cougars have been the form team all season having not lost once prior to facing USC Thunder. Thunder however entered the game with confidence and a plan, overcoming Cougars in a brilliant match. All the girls did their part, but exceptional performances from Woulf, Unie and Litherland allowed Thunder to lift their game to another level. They claimed the victory as well as bonus points from two quarter wins and a draw in the fourth quarter. As a result, Thunder have moved into third place on the ladder heading into round 9 and 10 which will be played as a double header on Saturday the 31st of October and then Sunday 1st of November.