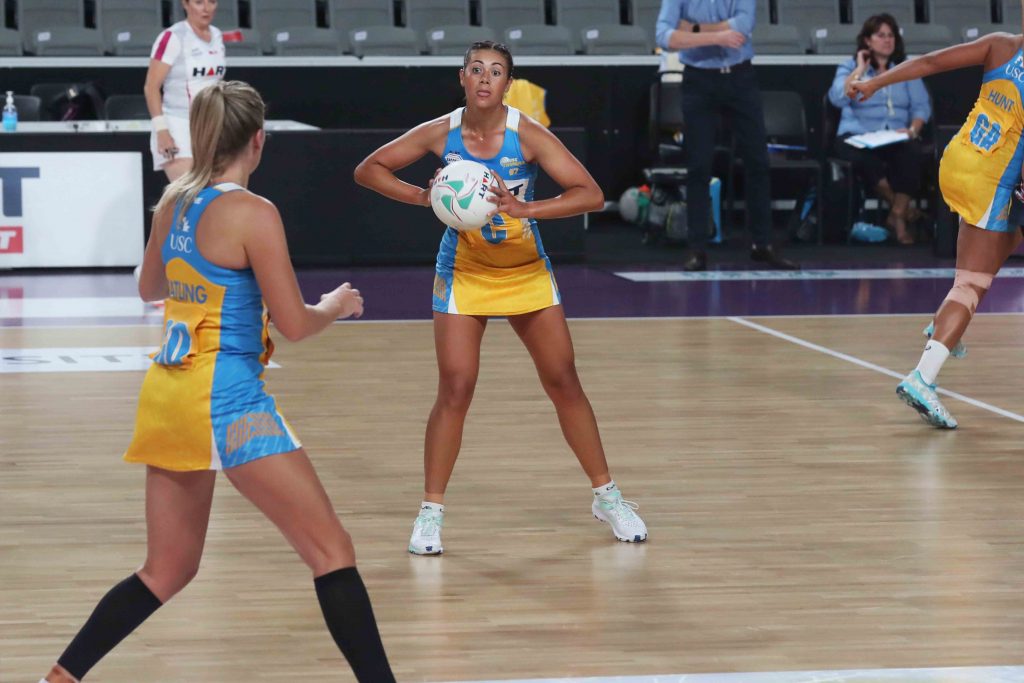 NISSAN Arena hosted round 5 of the HART Sapphire Series as the USC Thunder faced off against the Bond University Bull sharks. Round 5 also represented R U OK round, reminding us to check in on those around us and to learn what to say after you ask R U OK. Thunder entered this match hoping for a win after a disappointing loss to the Ipswich Jets last time out. Chloe Bingham started the game at GS alongside Annie Lawrie at GA. Ali Wilshier started at WA, Chloe Litherland at C, Ash Uni at WD, Lily-May Catling at GD, and Sarahpheinna Woulf at GK.

Bull Sharks had the centre pass and scored the first goal after both sides forced two turnovers; a sign of the pace that was to come. Chloe Bingham scored moments later to give USC their first goal before a Catling intercept gave Thunder their second through Lawrie. Bingham scored Thunders third and fourth on the back of a beautiful pass by Wilshier, and then an intercept by Woulf. Catling started the game on a mission, being involved in at least four turnovers after only seven minutes. A four-minute goalless period is interrupted by a Thunder goal. The quarter was very low scoring with Thunder claiming the first bonus points on offer, 11 goals to 7. Bull Sharks had the centre pass for the second quarter and scored first again. Catling picked up yet another turnover and put Thunder back on the front foot. Thunder called a timeout with under 8 minutes to go. Lawrie came on at GS and scored two goals in a minute and a half before Bull Sharks called their time out. Catling was the turnover queen so far this game and was proving massive for the Thunder as they claimed the second quarter bonus points and held an eight-goal lead at the major break.

Thunder had the centre pass in the third quarter and scored first through Lawrie before Hunt scored the second. Unie forced an important turnover to allow Thunder to score twice more as the lead stretched out to 11. Catling and Woulf had been involved in more turnovers than I could count by this point as the Bull Sharks call a timeout. Thunder held a strong third quarter lead which evaporated as the Bull Sharks went on an 8 goals to 1 run. Thunder held strong as the quarter ended 11-11, with both teams sharing the bonus points. Lawrie scored first in the final quarter as the Bull Sharks hit back. A Goal for goal affair throughout most of the fourth spurred Thunder into a timeout with six minutes to go. The Bull sharks were highly energised throughout the final five minutes and got within five goals before Thunder scored last. Bull Sharks claimed the final bonus points of the game; however Thunder claimed a six goal victory.

Some strong defence by both sides saw plenty of errors in this game, but Thunder were professional enough to steady when it mattered and take the win. Thunder will be happy with the 10 points for the victory and five bonus points for quarter results, however they will be rueing missed opportunities to claim even more. Lily-May Catling was exceptional and a worthy nomination for player of the match. USC Thunder take the week off next weekend before returning on Sunday 27th September against the Ipswich Jets.