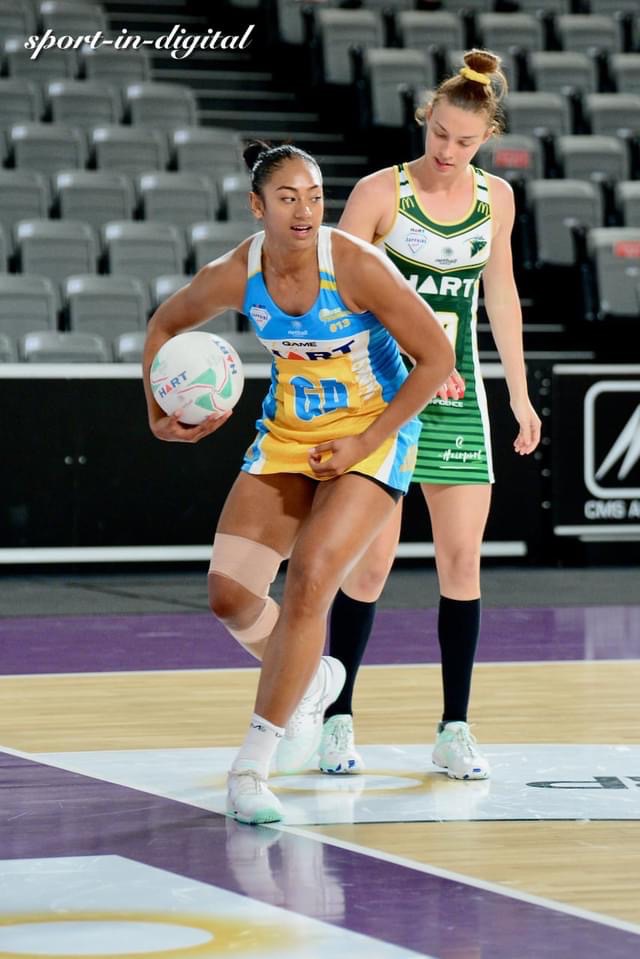 Round 6 of the HART Sapphire Series saw fourth placed USC Thunder face the second placed USQ Jets at Nissan arena. Thunder entered this game full of confidence on the back of a victory against the Bull Sharks in round 5. Chloe Bingham started at GS, Annie Lawrie at GA, and Ali Wilshier at WA. Starting at C was Chloe Litherland, at WD was Lily-May Catling, at GD was Sarahpheinna Woulf, and Adrienne Keeffe at GK. Binnian Hunt and captain Ash Unie both started off the bench after playing for Sunshine Coast Lightning earlier in the day and were joined by Josie Bingham.

Jets had the first centre pass and goal before Lawrie fired back immediately. Bingham scored Thunders second goal as the game lacked intensity early. Jets defence forced a couple of Thunder turnovers as they moved four goals ahead. Thunder fought back soon after to even the game as the first break approached. Jets scored a couple of quick goals to claim the first bonus points. Thunder had the opening centre pass of the second quarter and scored first. Jets defence continued to trouble the Thunder who called a timeout after only four minutes. Both sides went goal for goal when they returned to the court before Jets called their own timeout with four minutes to go in the half. Thunder remained resilient in the face of an aggressive Jets side, however they stilled entered half time 10 goals down.

Thunder welcomed Ash Unie into the game at WD for the second half and she made an immediate difference. The girls were moving the ball through the mid court with some clever passes from Litherland, Wilshier and now Unie as they did their best to overcome the immense Jets defensive pressure. Keeffe had been impressive at GK having made several excellent turnovers against a strong opposition GS. Binnian Hunt also entered the game this quarter, taking over at GA. Thunder managed their deficit throughout most of the quarter before shortening the margin late. Thunder won the bonus points for the third quarter with 11 goals to 9 and entered the final break only eight goals down. Jets had the first centre pass of Q4 before Thunder forced the turnover and scored through Hunt. Jets scored five straight after that with Thunder reacting with a timeout. The timeout worked at calming the girls who then went goal for goal with the jets once again by attacking well and piling on the pressure in defence. Thunder dragged the margin back to 9 with some quick Bingham goals, forcing Jets to use their timeout with six minutes remaining in the game. Thunder conceded a couple of late goals to finish down by 13.

Thunder should be proud of their second half after the Jets rattled them in the first. Claiming two bonus points for taking out the third quarter against a top of the table side will also be important moving forward. Keeffe and Woulf were impressive at the back against a high-flying Jets offence. The girls have a week off before coming back for round 7 in a home game at USC on Saturday 10th October.