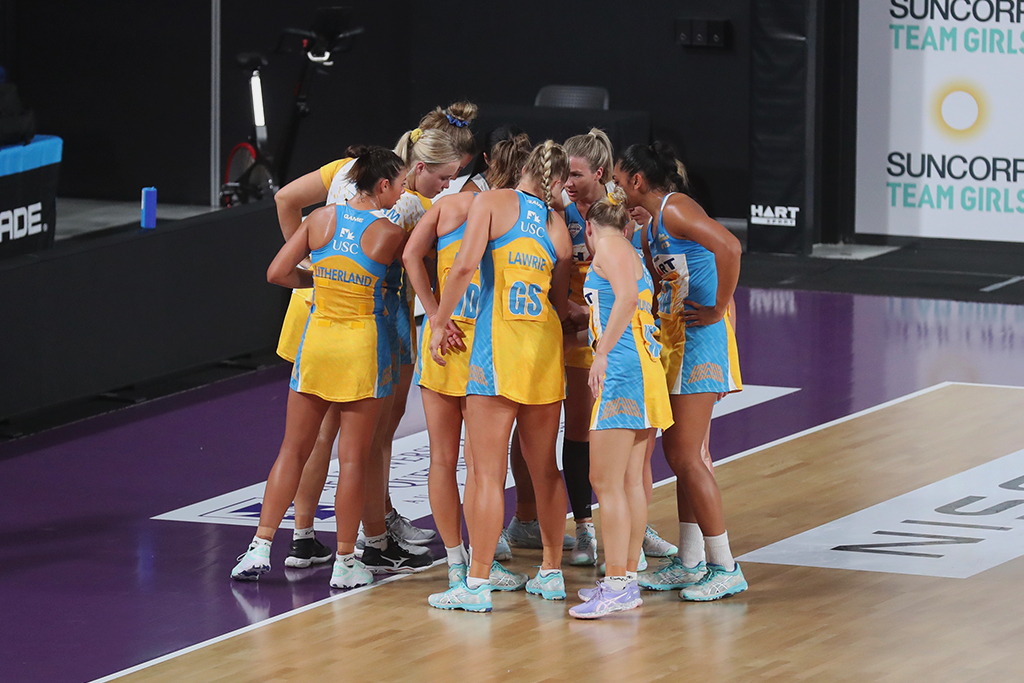 USC Thunder travelled to NISSAN Arena to face the undefeated Ipswich Jets in round 4 of the HART Sapphire Series on Sunday. Thunder entered the matchup with confidence after claiming a quarter and performing admirably against the top of the table Cougars last time out. Binnian Hunt returned to the side at GA after missing the previous round and was joined in the goal circle by Annie Lawrie (GS). Josie Hungerford started the game at WA, Chloe Litherland at C and captain Ash Unie at WD. Lily-May Catling (GD) and Sarahpheinna Woulf (GK) continued their partnership at the back.

Jets had the centre pass and were first to score before Lawrie opened for Thunder. A slow start from Thunder saw the Jets skip away to an early 4-1 lead after a couple of missed shots from Lawrie and Hunt, however the girls made almost immediate amends as they scored three in a row and tied the game up only minutes later. Another Hunt goal made it four in a row as Thunder moved ahead. Both teams went goal for goal for the remainder of the quarter. A physical first stanza saw both teams score 12 goals to share the bonus points. Thunder scored the first goal of the second quarter after breaking the Jets centre pass and backed it up with a second. A massive Woulf intercept allowed Thunder to score a third and then a fourth consecutive goal. Another Jets error handed Thunder yet another turnover as they scored their first straight goal to open the quarter before the Jets called a timeout with 11 minutes remaining in the half. An exceptional defensive performance by all the girls was killing the Jets as Lawrie scored again to extend to six. The Jets responded, dragging the margin back to one before Thunder called a timeout on the eve of half time. With four minutes remaining until the break, Thunder couldn’t slow the Jets momentum who went on to claim the second quarter bonus points.

Hunt moved to GS for the start of the third quarter and scored the Thunders first. Jets however continued their momentum from the end of the second quarter and skipped away after a few minutes. Thunder called an early timeout, but it wasn’t successful in slowing the Jets who went on to claim the quarter by 9 and were rarely troubled by Thunder. Lawrie scored Thunder’s first in the final quarter and was now joined in the goal circle by Chloe Bingham who scored the second. Thunder started to move the ball around a lot more this quarter and took an early two goal lead. Adrienne Keefe had entered the game at GK by this point and was defending quite well. Litherland was involved in everything and fed the ball well to Bingham who was making her mark on this quarter. Jets were still strong and took a one goal lead before they called a timeout with five minutes to go. After the break the Jets flexed their muscles through the closing stages and claimed the final bonus points on offer.

Thunder will be buoyed by their first half performance but will have gone home disappointed in their second half. There’s plenty to take away from this game with some impressive ball movement against a top of the table side highlighting their stronger periods. Another impressive first quarter also allowed them to claim a bonus point. If Thunder can maintain their first quarter momentum in future games, then there’s some real potential to move up the ladder. Thunder will next face the Bond University Bull sharks at NISSAN Arena on Sunday at 7pm.