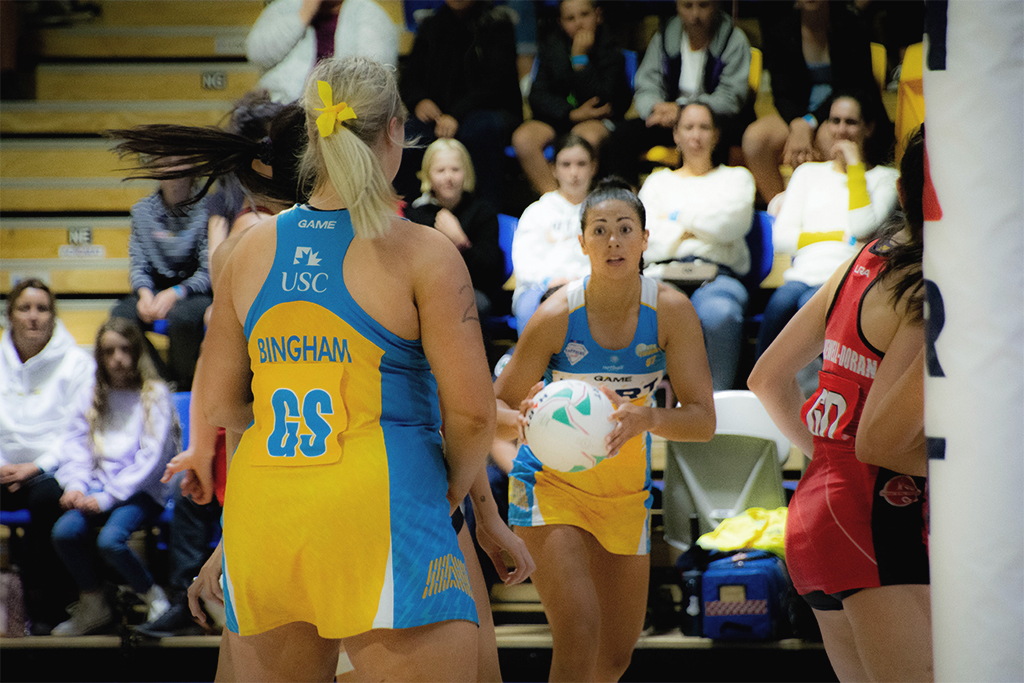 Round 3 of the HART Sapphire Series saw USC Thunder host their first home game of the season at USC Stadium as they took on the top of the table Brisbane North Cougars. Thunder had won in round 2 against the Tigers and were hoping to continue that form against the defending grand finalists. Chloe Bingham was again promoted to the starting side at GS alongside Annie Lawrie (GA). Ali Wilshire started at WA with Chloe Litherland at C, whilst Ash Uni (WD), Lily-May Catling (GD) and Sarahphienna Woulf (GK) made up the back three.

Cougars had the centre pass to open the game and started strong, scoring the first three goals. A Litherland intercept changed the momentum early, allowing Chloe Bingham to score Thunder’s first before Lawrie backed it up with a second. Woulf and Catling had already forced multiple turnovers and Thunder took advantage and pulled the early margin back. Some epic defence from the girls kept the Cougars at bay. Chloe Bingham scored right as the buzzer sounded to win the quarter 11-10 and take the first available bonus points. Cougars scored the first two goals of the second quarter as well. Thunder upped their work rate to counteract the pace of the Cougars offence. Wilshire, Litherland, Unie and Hungerford responded to the Cougars increased pressure with impressive defensive efforts and a number of quality passes. A Thunder timeout with under 8 minutes left in the half opened up an opportunity for Josie Bingham to enter the game. Thunder kept their energy high for the remainder of the half, however Cougars were just too strong. Thunder entered the major break with a 10-goal deficit.

Thunder scored first in the second half through a Josie Bingham goal. Thunder were going goal for goal against the Cougars early on with Josie Bingham and Annie Lawrie converting most opportunities whilst Chloe Bingham got involved too. A strong period from the Cougars saw Thunder concede a couple of quick goals. Some positional changes allowed Thunder to calm, however Cougars took the third quarter by five. Thunder came out firing and claimed the first goal of the final stanza. Catling and Uni proved crucial in defence as they forced multiple turnovers that resulted in goals. With under 8 minutes to go, Thunder were challenging for bonus points with seven goals apiece before Lawrie scored another to go one ahead. Lawrie’s impressive long shots proved to be important as the Cougars were strong in defence. With two minutes remaining, Thunder were sitting 11-11 before a timeout was called moments later. Thunder were gallant in the closing stages but fell only one goal shy of the bonus points.

The final score was not representative of how close the game was. Thunder were impressive through most of the match and were only let down by a lopsided second quarter. The Cougars are one of the top sides in the competition and the girls should be proud of themselves for their grit and determination. The first quarter lead also meant the side picked up an important two bonus points. Thunder are now preparing for their round 4 game against the Ipswich Jets at NISSAN Arena on Sunday September 6 at 7pm.