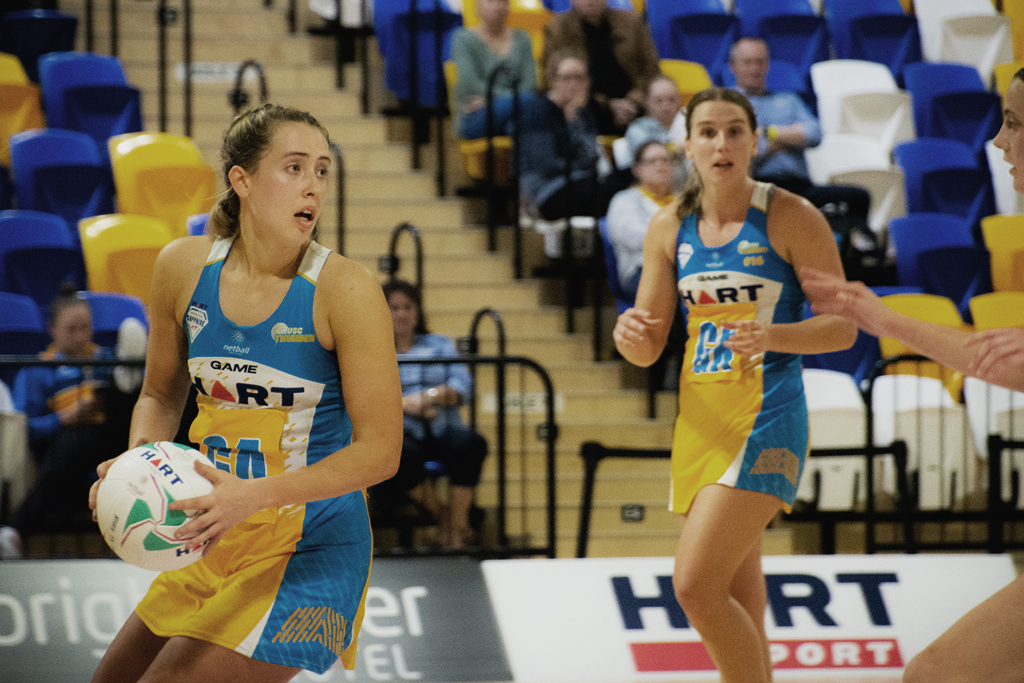 USC Thunder’s Ruby team battled against the North Brisbane Cougars at USC’s sport stadium in round 3 of the 2020 HART Ruby Series. In Thunder Ruby’s third round they were down one player, having lost Nicole Guenther after she tore her right ACL during training. The team’s line up for the game saw Adrienne Keefe in GK, alongside Lily McClure as GD and Amy Metcalf in WD. Sarah Harris was in centre position, with Josie Bringham (WA) and Abbie Mischke (GA) helping with attacks, followed by Matilda Lawrie in GS.

The game opened with Cougars taking centre pass and scoring the first goal. Thunder were off to a slow start, but they didn’t back down, with Keefe intercepting the Cougars attacks. They eventually pushed through and got the ball down to Mischke who made the first shot of the night for Thunder with 9 minutes left in the quarter. There was a constant back and forth throughout the quarter, until after the first time out where Mischke got three shots in a row taking back the momentum at the end of the quarter. Thunder started the second quarter off with another goal shortly followed by both Mischke (GS) and Bingham (GA) getting more goals. The game started picking up as Thunder got more competitive and started moving faster than they did in the first quarter. After another time out call, Thunder took back control and overtook the Cougars with the help of Keefe intercepting. The first half ended with Thunder in the lead with 22 to 20.

The second half kicked off with the Cougars scoring, but Thunder fought back even harder than before. Keefe and Bonser (WD) kept up with the defence, intercepting ball after ball, refusing to give up. Centre Metcalf kept the ball moving and sending it back to the attackers with the help of Harris. Both teams refused to let the other get to the ball, with a constant back-and-forth. Harris kept breaking through the defenders to get her team the ball and move the game forward. Thunder took the lead at the end of the third quarter. Going into the final quarter, the heat did not ease up, with both teams shooting goal-to-goal. Keefe, Harris and Bonser kept up with the interceptions and getting the ball back down to their attackers and shooters. McClure was also doing a great job defending and blocking the Cougars and getting the ball back to Thunder for Lawrie to score a few shots. Harris and Metcalf kept breaking free from their defenders and got the ball down the court. With 7 minutes left in the quarter and time out was called and Bingham and Mischke came back in with Lawrie stepping out. In the final minutes of the game Bingham slipped and was injured, with the umpire not calling time which cost the Thunder the game.

Thunder fought their hardest and gave the Cougars a tough match and refused to back down till the very end. It was a close call with the game constantly moving back and forth. Thunder will be playing the next round against the Ipswich Jets on Sunday the 6th of September at NISSAN Arena.