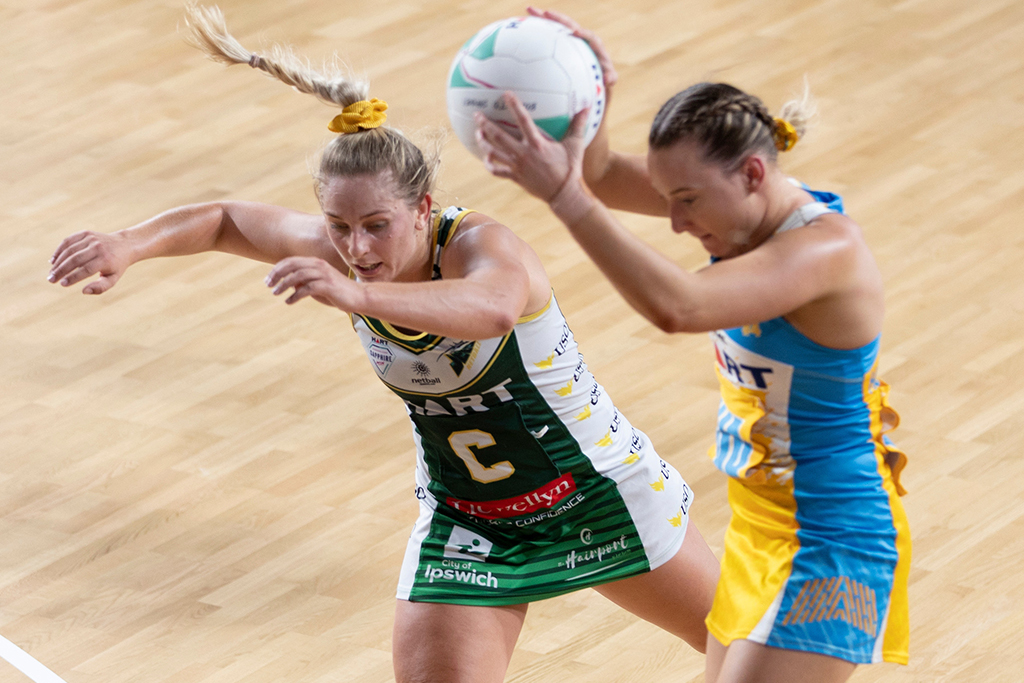 USC Thunder faced the USQ Jets in the HART Sapphire series preliminary final on Saturday night. The victor will go on to face the Cougars in the grand final, whilst the loser’s season is over. Thunder were riding high after defeating the Wildcats last week and entered the match on the back of five consecutive wins. Thunder submitted an unchanged line-up from last week.

Thunder had the opening centre pass and converted through Annie Lawrie. Ash Unie made an intercept on the next play allowed Hunt to score her first of the match as well. Unie made a second intercept within a minute of her first which allowed Lawrie to score a beautiful goal. After only a few minutes Thunder had the upper hand with a five-goal lead. Jets scored three in a row, but Thunder responded immediately with three of their own. The remainder of the quarter was relatively even, and Thunder enter the first break with a 5 goal advantage. Jets had the first centre pass of the second quarter but immediately hand it over thanks to a Keefe intercept. Woulf made an intercept of her own soon after. Despite plenty of action, the first goal didn’t come until after 2 minutes of play when Jets scored, and Thunder responded through Hunt. It was a relatively quiet quarter by Thunder, only scoring 9 goals to Jets 15 as Jets entered half time with a one goal advantage.

Thunder started poorly in the third quarter conceding 8 of the first 9 goals. Lawrie found her distance and scored a couple of beautiful goals, but the girls still trail by 8. Keefe had been exceptional since coming on at GK and a forced turnover aided in a much-needed change of momentum. Thunder scored 5 in a row, and seven of the last eight to enter the final break down by only two. Thunder again gave up the early start allowing the Jets to stretch out to a five-goal lead. Thunder responded with five in a row to even the scores up at 44-44. Lawrie shone under pressure and shot from everywhere in the closing stages and Thunder desperately fought to keep their season alive. Jets were defending exceptionally well which made service into the goal circle difficult and unfortunately Thunder fell just short. Jets won the match 51-48, knocking USC out of the finals.

A preliminary final appearance capped off an exceptional season by USC Thunder who made the finals series for the first time. The girls played excellent netball at the back end of the season and were only really let down by a quiet second quarter during this match. With many of the girls going on to play elsewhere in 2021 it would have felt nice for them to bring some great results for Thunder this season. Although Thunder is now out of the competition, the Grand Final between USQ Jets and Brisbane North Cougars will be played on Saturday the 21st November.