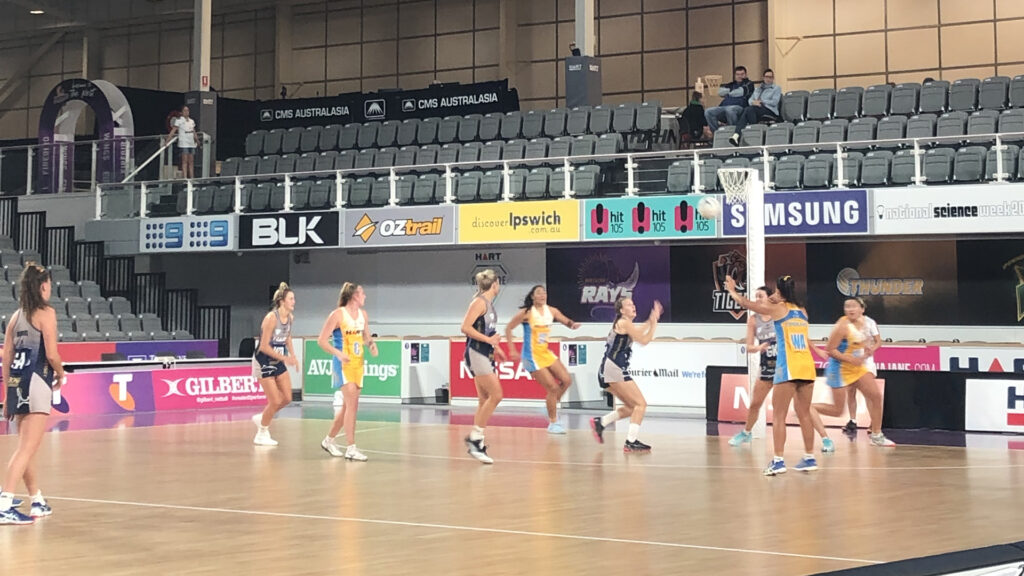 Round 8 of the HART Sapphire series marked the start of the second half of the season. On Saturday August 10, 6thplaced USC Thunder travelled to take on the 5thplaced Bond University Bull Sharks for an allocated away game at QSNC. Thunder were forced into a number of positional changes leading on from last round due to player availability and injury. Nicole Guenther got a start at C after Chloe Litherland moved into WA to replace the injured Josephine Hungerford. Abigail Latu-Meafou, who last week travelled with the Queensland Firebirds in the Suncorp Super Netball, returned to the side at GA. Sarahpheinna Woulf moved to GS as Jesse Wardlaw had also been struck down by injury during the Jets match and Sienna Allen returned to the starting side at GK with Annika Lee-Jones back with the Sunshine Coast Lightning squad for their Round 12 Giants clash.

This was the second time the two sides had faced each other this season, with Thunder aiming to replicate their round one result where they had come out on top. Thunder unfortunately had to start on the back foot with their positional changes disrupting their chemistry, allowing the Bull Sharks to take a quick lead. Thunder quickly steadied the ship however and finished the first quarter strong and entered the second quarter with momentum. Being 6 points down didn’t seem to disrupt their game plan too much as they began to build their combinations and string some passes together. Litherland and Guenther were feeding some fantastic balls through to Woulf and Latu-Meafou, with both shooting well. Allen, Catling and Unie were playing great in defence, forcing Bull Sharks to work for every goal. The second quarter ended as the highest scoring of the game with Thunder down 35-22 at the main break.

Ruby series player, Olivia Lanskey who was elevated to the Sapphire squad alongside Ruby team mates Adrienne Keeffe and Chloe Bingham, entered the game at C at the commencement of the third quarter, whilst Latu-Meafou, who was yet to miss a shot, swapped with Woulf at GS. Unie continued to display her prowess on the court by forcing numerous turnovers in defence and creating wonderful goal scoring opportunities in attack. The third quarter was the closest of the game as a result of Thunder’s pressure, only falling four goals short. Thunder came out firing in the fourth quarter, desperate to claim the bonus points. Every player was significantly contributing and they were scoring well as a result. It was Thunder’s best quarter of the match in regard to polish and opportunities.

Thunder played entertaining Netball right up until the final buzzer. Their defence looks better every week whilst some electrifying offensive passing shows plenty of promise moving forward. Next round they will face the Tigers at home and will fancy their chances after a close match in round 2 earlier in the season.