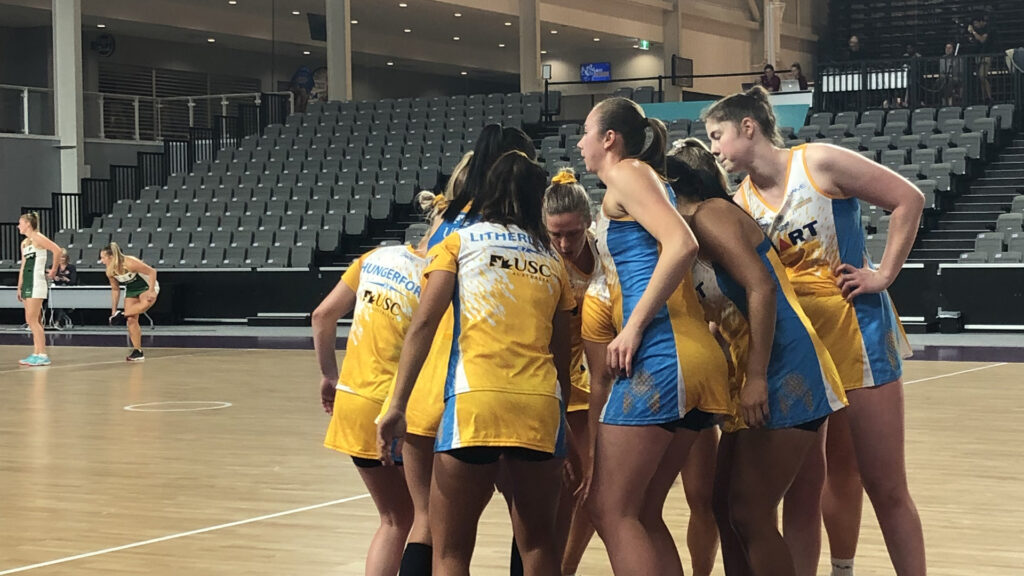 Sunday August 4 saw the 4th placed USC Thunder host the 2nd placed Ipswich Jets at QSNC in round 7 of the HART Sapphire Series. Both teams, who met for the first time, were looking for wins to solidify their position in the top 4 as the competition nears toward the half-way mark.

Thunder were without regular GS, Ellie Bird, who recently departed the Sapphire Series to commence an off-season in preparation for the ANZ Premiership pre-season, whilst GA, Abigail Latu-Meafou, was also unavailable due to Queensland Firebirds selection to take on the Giants in Round 11 of the Suncorp Super Netball.

Thunder had the first centre pass and the game started with three consecutive turnovers before the first goal was scored by the Jets. Both sides looked even as they passed the five-minute mark with Thunder holding a 4-3 lead. Annika Lee-Jones and Lily-May Catling were defending well and had already forced a couple of errors from the Jets. Sarahpheinna Woulf in GA and Jesse Wardlaw in GS combined well with Josie Hungerford and Chloe Litherland in WA and C to score a couple of impressive goals. Thunder fell behind but were in contact throughout the quarter and a strong final few minutes saw them sit only one goal behind at the break. A 12-13 quarter lead saw the Jets claim the first bonus points of the game.

Lee-Jones continued to be strong throughout the second quarter, supported by Sienna Allen in GD, with the pair applying pressure at every opportunity. Jets had a four-goal quarter lead when a timeout was called by Thunder just beyond five minutes into the quarter. Ruby series player Chloe Bingham replaced Wardlaw at GS after she picked up a match-ending injury. Hungerford also hobbled off the court with five minutes remaining and didn’t return to the game. It was a difficult quarter with injury forcing a number of positional changes which saw the Jets finish in front, 9-18.

Thunder had the first centre pass of the third quarter and started well, scoring four goals apiece with the Jets after five minutes. The Jets scored the next four and then the Thunder scored the next two after that. Jets had the advantage as a timeout was called with seven minutes remaining until the final break. Unie continued to display her excellent on-court vision with some fantastic passes into the goal circle for Bingham and Woulf. Thunder looked a chance of claiming the bonus points but fell only three goals short with Jets taking the quarter, 11-14.

Thunder again had the centre as the fourth quarter began. Jet’s began fast and pushed out to a 3-9 quarter lead. Thunder began to stem the flow of goals with Sienna Allen still giving it her all, forcing turnovers and creating opportunities. The rest of the team began to feed off her energy, scoring four consecutive goals towards the end of the game to reduce the margin at the final buzzer. Jets won the fourth quarter 12-16.

Thunder didn’t claim any bonus points throughout the game, however they showed plenty of grit and determination to fight right up until the final buzzer. Despite the final score, the girls in the goal circle shot at 83%, which was better than the Jets conversion rate, whilst in defence they forced an impressive 27 turnovers.

Thunder’s round 8 match will be an allocated away game against the Bond University Bull Sharks who Thunder defeated in round one. They will be hoping to see a repeat of that result this weekend.