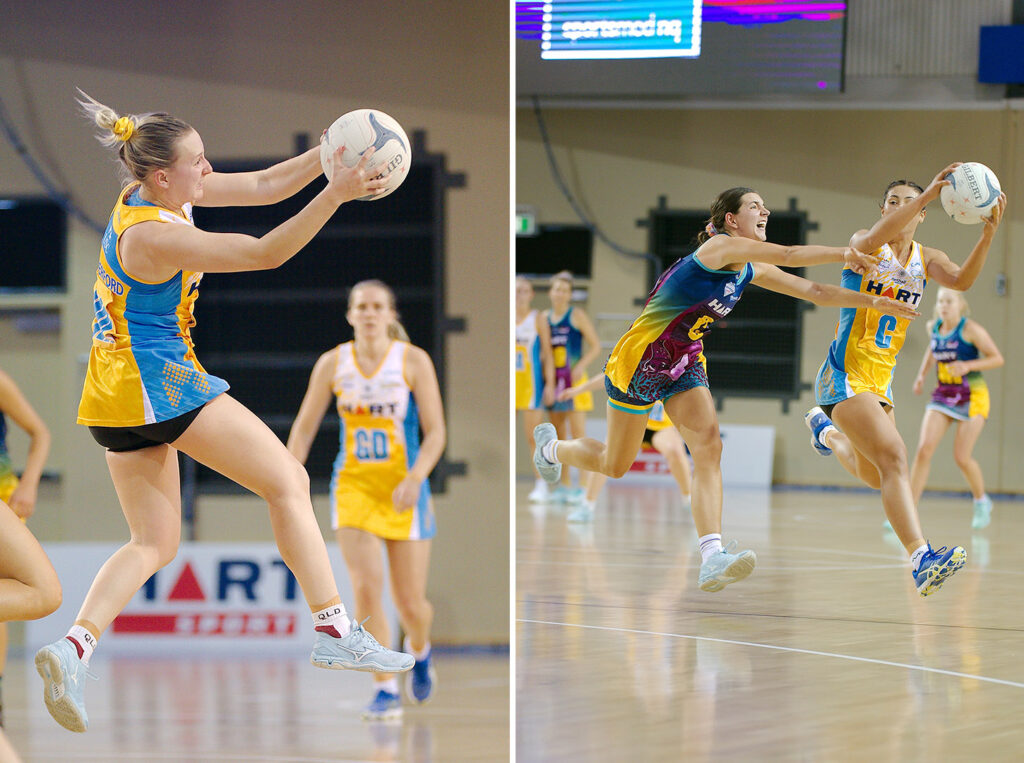 Round 5 of the HART Sapphire series saw USC Thunder travel to North Queensland to take on the Northern Rays at Townsville Stadium. After four rounds, the two sides sit 4thand 7thon the ladder respectively and both vying for as many points possible to enhance their ladder placing.

The start of the game was a close affair with the two sides going goal-for-goal in the first five minutes before Rays took a two-goal lead midway through the first quarter. Some great Thunder defence in Nicole Guenther (WD), Ashlee Unie (GD) and Lily-May Catling (GK), forced multiple turnovers, but some early desperation to score goals saw a number of passes not getting to their intended targets. Rays were not able to take full advantage and only held a two-goal lead throughout the quarter. They finished 13-11 at the break, with the Rays’ scoring their first bonus points for the season.

The second quarter was almost all Thunder as they came out firing, scoring three quick goals and taking the lead of the match after only a couple of minutes. Thunder’s defensive efforts from the first quarter remained and they then began to capitalise on their opportunities. Some better passes to the circle and precision shooting from Ellie Bird (GS) and Abbie Mischke (GA), allowed Thunder to stretch out to a four-goal lead. Thunder further extended their lead out to 7 before Rays forced a couple of turnovers and scored some quick goals of their own towards the end of the quarter. The girls remained calm to stop the Rays offence, allowing Thunder to go into the half time break with a five-goal lead. Thunder won the quarter by seven goals, taking their first bonus points for the match.

The third quarter saw the home side fast out of the blocks, trying to close the gap created by the Thunder. They continued to pressure, scoring 8 goals to 3 approaching midway through the quarter. The scores were even at 31 apiece before Thunder stretched their lead back out to two. Thunder called a timeout shortly after with the scores at 32-34. They remained strong after play resumed, scoring seven goals to Rays’ one to close the quarter. Thunder won the quarter by three to gain the bonus points and held an eight-point advantage heading into the final break.

Rays again came out firing early in the fourth, scoring 5 goals to 2 after only four minutes, but Thunder held steady to maintain a 6-goal lead as both sides continued to pressure. The teams were defending well so scoring had slowed midway through the quarter, but some fantastic netball was on display. Thunder began forcing turnovers which appeared to break the Rays fortitude, allowing USC to score a couple of quick goals, stretching their lead to 9. The home side then called a timeout with under three minutes remaining in the game. Thunder were again strong after the timeout, stretching their lead to twelve at the final buzzer. They won the quarter by four goals to take their third lot of bonus points for the game.

Thanks to the match victory and wins in three of the four quarters, Thunder picked up a total of 16 competition points. They showed great resolve to not only come from behind after the first quarter, but to absorb immense pressure from the Rays numerous times throughout the game. Thunder also had a number of Ruby players debut for the Sapphire side, with Abbie Mischke, Ainslee O’Connell, Josephine Bingham and Rachael Wright all taking the court throughout the game with great displays from all of them.