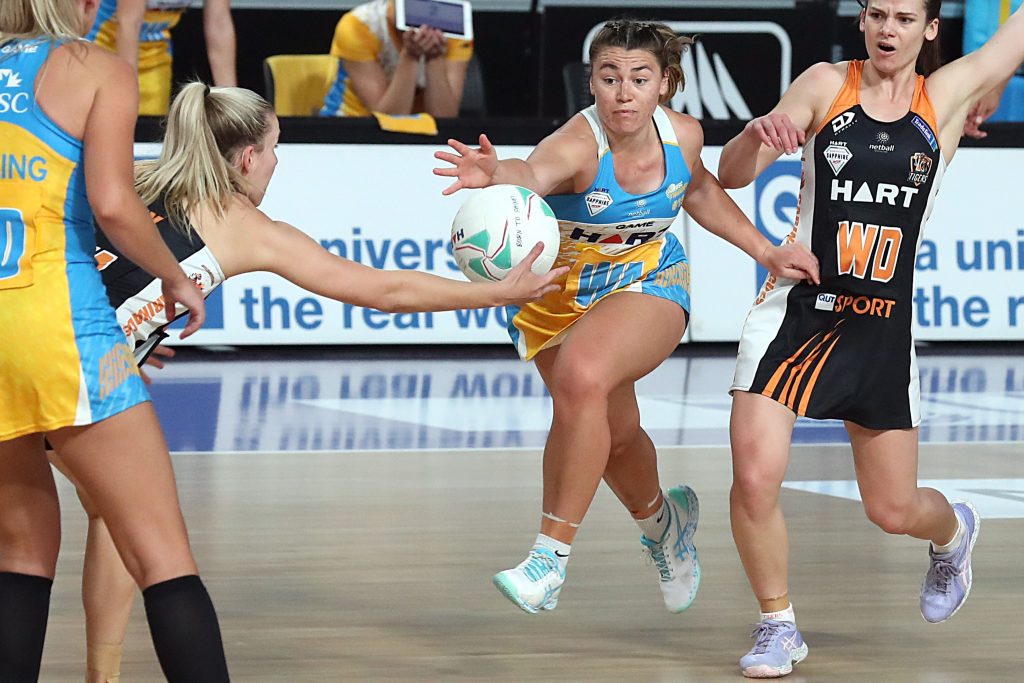 USC Thunder faced the Carina Leagues Club Tigers in the second round of the 2020 HART Sapphire Series at NISSAN Arena. Thunder were coming off a very impressive performance against the defending champions in round 1 where they fell only six goals short by the final buzzer. Chloe Bingham (GS) and Josie Hungerford (WD) were promoted to the starting side and were ready to make an impact.

Thunder started with the centre pass but conceded the opening goal. Bingham scored Thunder’s first goals before Lawrie reminded us of how good she is at taking long shots. A couple of errors allowed the Tigers to stretch out to a small lead. Binnian Hunt (GA) and Ash Unie (WD) entered the game after five minutes and immediately Thunder began to look more composed. Thunder draw even with the Tigers and then took the lead with three minutes left in the quarter. Tigers fought back as the quarter ended in an 11-11 draw with both sides sharing the bonus points. The second quarter started low scoring for both teams. Thunder conceded a couple of easy goals after some great ideas fell astray. Thunder called a timeout with nine minutes remaining in the half. Lawrie had missed a couple of shots this quarter but nailed a goal from distance after the T.O and backed it up with another. Hunt also got involved in the goal scoring as Thunder went on a 5-0 run. Tigers called a timeout with under five minutes left. Lawrie scored immediately to even it up before the Tigers finished strong to claim the bonus points.

Ash Unie opened the second half with a crucial intercept from the Tigers centre pass. Thunder scored three of the first four goals of the second half and looked strong. Catling, Woulf and Unie were massive in defence this quarter; all three forcing turnovers for fun. Lawrie had again found her distance and was huge from the goal circle. Thunder clawed back the five-goal deficit they had at half time to move ahead by one. Wilshire’s composure through the middle had allowed both ends of the court to connect wonderfully. This improved performance saw Thunder claim the bonus points with an 11-17 performance and took a one goal lead into the final stanza. Great defence early in the fourth allowed Thunder to take advantage and move ahead by four goals before a Tigers fight back evened it up. Thunder called a timeout with nine minutes to go in the match. It was low scoring after the break, but it was Thunder who claimed three consecutive goals to move ahead prior to a Tigers timeout with under seven minutes remaining. Tigers pulled the lead back to one after their T.O, however Thunder gained control and stretched out to an impressive seven goal lead as the final buzzer sounded.

Thunder were very impressive this match and were most in control when managing their lead late in the final quarter. With 10 points for the victory, two bonus points for each quarter they won and the single bonus point for the drawn first quarter, Thunder can call this a successful result. Thunder will next face the Brisbane North Cougars from USC Stadium on Saturday August 29 at 5pm.