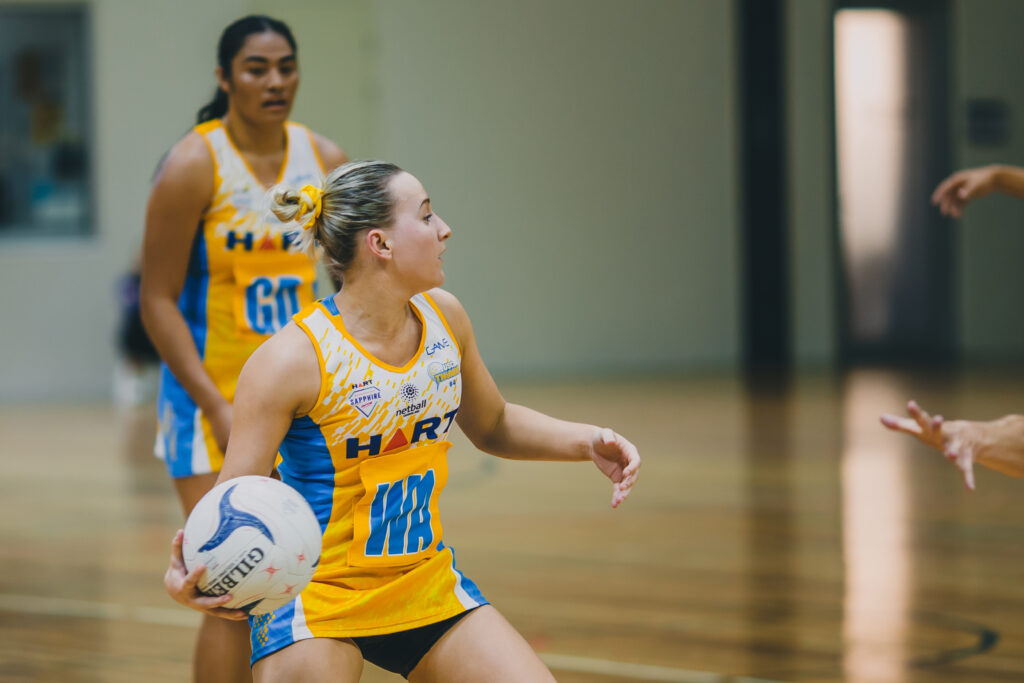 In round 10 of the HART Sapphire series, 6th placed USC Thunder travelled to QSNC for an allocated away game against the top of the table Brisbane North Cougars. Thunder made a number of changes to the team from last week which included the return of Annika Lee-Jones at GK alongside Lily-May Catling in GD. Sarahpheinna Woulf swapped from GD to GS this week and was accompanied in the goal circle by Courtney Murphy (GA). Josie Hungerford in WA and Ash Unie in WD remained in their preferred positions, whilst Nicole Guenther started the match at C.

Thunder opened the scoring with three consecutive goals before Cougars got on the board. Uncharacteristic errors by the home team allowed Thunder to retain their lead for most of the first quarter. An unfortunate injury timeout for Josie Hungerford stopped play whilst she was replaced at WA by Chloe Litherland. Woulf displayed her skill and versatility by scoring goals and forcing turnovers from GS. Thunder fell nine goals short of the bonus points by the end of the first quarter but were much closer in the second. Cougars called a timeout mid-way through with the quarter scores tied at 7 goals apiece. Thunder called their own timeout three minutes later after conceding a couple of fast goals.  Some great defensive touches by the girls at the back allowed Thunder some opportunities as the half closed, falling only five goals short of bonus points.

Cougars flexed their muscles throughout the second half which reflected poorly for Thunder on the score sheet. Thunder were far stronger than the score suggested with numerous promising plays going unrewarded. Allen, Catling and Unie were the key defensive players throughout the half and were handling the Cougars attack well, forcing multiple turnovers and making lots of touches on the ball, however the Cougars were passing fast and shooting well, which was difficult to defend against. Woulf made some clever plays at GA which GS Bingham could take advantage of. The mid court was a bit of a battleground with both teams struggling to move the ball up to the goal circles.

Thunder may be feeling deflated after the result, but the Cougars are top of the table and are undefeated; they were always going to be a tough ask to beat. Thunder showed plenty of determination in the second half to keep putting in the effort despite the score line. The girls challenged the Cougars right up to the final buzzer. Injury and forced changes have decimated the Thunder side who have comfortably used more players this season than any other team in the competition. Thunder face the 7th placed Northern Rays in round 11 as an allocated home game at QSNC. They defeated Rays in the first match up earlier this year and will be confident of repeating that result.