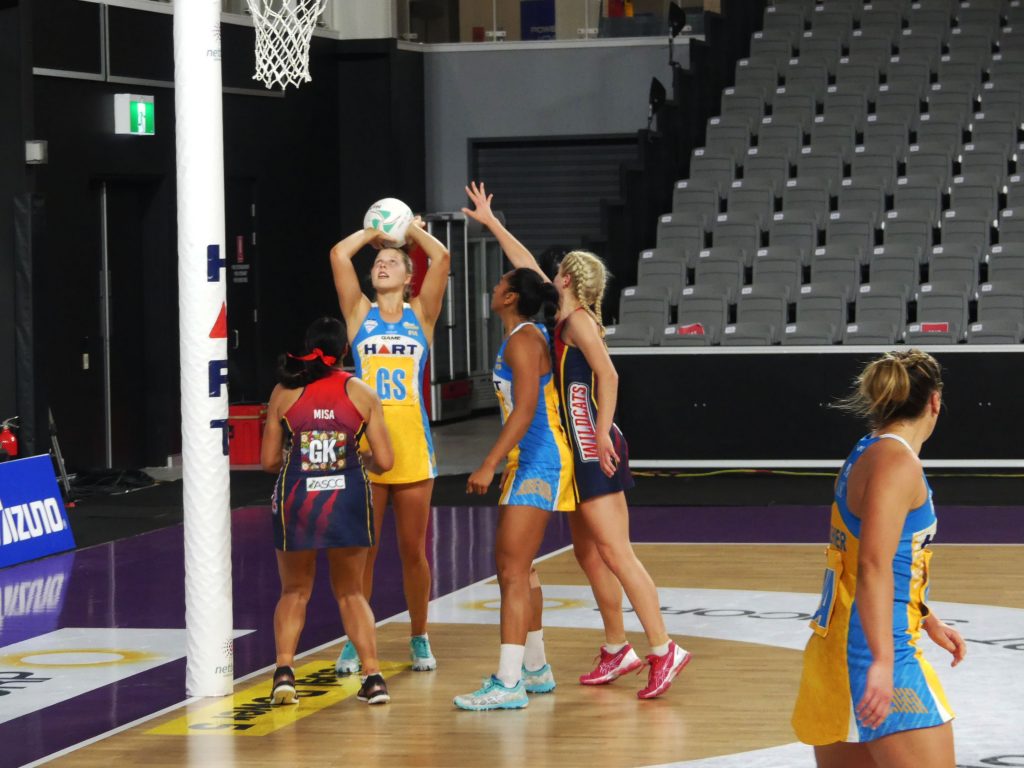 USC Thunder kicked of their 2020 HART Sapphire Series campaign with a tough match-up against the QUT Wildcats at NISSAN Arena. Thunder were hoping to start their season on the front foot with a win over the defending champions. A fresh attacking trio of Annabelle Lawrie (GS), Binnian Hunt (GA) and Ali Wilshier (WA) showed plenty of promise heading into the new season. Chloe Litherland was the starting C, whilst captain Ash Unie played WD ahead of Lily-May Catling (GD) and Sarahphienna Woulf (GK).

Thunder started the game with the centre pass and opened the scoring through Hunt. Lawrie showed early that she was happy to shoot from anywhere in the circle and was stretching the Wildcats defense regularly. The Wildcats responded with some quick goals and had started to pull a lead as Thunder called a time out late in the first quarter. Thunder are strong after the time out and head into the first break only two goals behind. Thunder began the second quarter with some fantastic ball movement, allowing them to go goal-for-goal with the defending champions. Ash Unie completed a mountain of work through the mid-court and was responsible for the increase in energy from her team. Catling had been intercepting for fun this quarter as the Wildcats called a time out with 6 minutes until half time. Thunder concede a couple of quick goals but finish the half only five goals off the lead.

Thunder opened the scoring in the second half through Lawrie as she continued to sink long shots. Thunder were moving the ball a lot through the mid-court and were making some brave passes before the Wildcats smartened up to it. Thunder then started to use the wings to make space as the game remained a tight afair. Some quick scoring each way saw the margin remain five goals. Both sides share the bonus points for a 13-13 quarter. Woulf made an impact early in the final stanza, making two intercepts in as many minutes to put Thunder on the front foot. Thunder scored four of the first five goals to come within two early on. Wildcats called a timeout after only 4 minutes as a result. Both sides went goal for goal until a critical defensive rebound from Woulf allowed Thunder to draw level through a Lawrie goal with under 8 minutes remaining. Wildcats scored some quick goals to stretch out to a lead of four. With four minutes to go, Thunder called a time out. After a small break, Thunder returned to pressuring the wildcats, falling only one goal short of a bonus point.

Thunder played an exceptional game against their much more fancied opponents. This impressive effort sets the standard for a strong season. The girls will be brimming with confidence heading into their next match against the Tigers at NISSAN Arena on August 23.