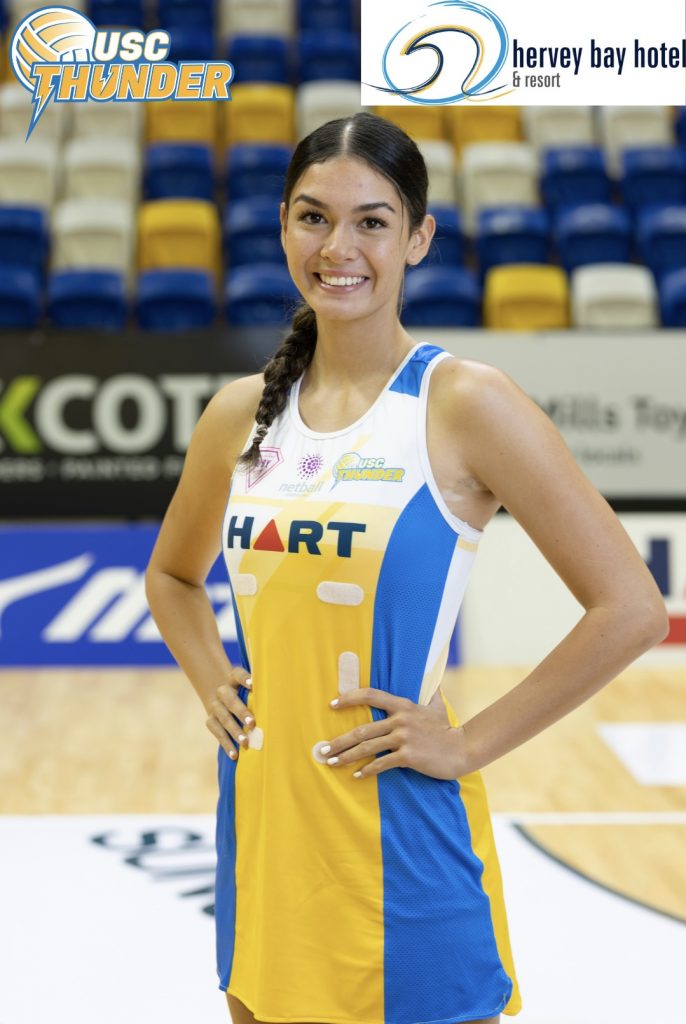 After trying out all sorts of different sports, Grace started playing netball at around 10 years old much to the delight of her mother, highly accomplished netball coach, Kerrieanne Farrelly. In fact, Grace credits her mother as both her netball and personal inspiration. As Grace says of her mother “She’s had the biggest journey through her life, she’s gone through so much, and she’s a very strong woman because of that “.

When Grace is not playing and training for the USC Thunder Ruby team, she enjoys all the usual Sunshine Coast aspects of life like going to the beach, being outdoors and hanging with friends.

Grace enjoys the culture at USC Thunder and with hard work, hopes to progress to HART Sapphire series and then upwards to Sunshine Coast Lighting at some stage in her future.

Highlight of Netball Career so far

Being the first Hervey Bay netballer to be selected in a Queensland squad was a big deal in 2021 but 2022 was even bigger with selection in the Tonga National Netball team for the PacificAus Sports Netball Series held in March where Tonga claimed victory in the final, 60-52, over the Fiji Pearls. On representing Tonga Grace was humble, “Honestly, I think it was a very, very long-term goal because it’s international, so I never thought I’d get to that, so close, so early in my career being 19 so not what I was expecting”. This young netballer was also very aware of how much joy this win gave to the Pacific nation after the run of natural disasters and covid had wreaked havoc on it. Grace hopes to again represent Tonga in future.

Situated on The Esplanade with stunning views of the beach and Fraser Island. “The resort features budget friendly accommodation, relaxed atmosphere, magnificent views, full Bar and Restaurant facilities; ‘Fig Tree Bistro’, pool and a full range of conference facilities and equipment hire.” An excellent choice to stay to at or enjoy an alfresco meal. Visit the Hervey Bay Hotel & Resort here or Facebook for more information.

This famous Hervey Bay institution has always been community-minded and Grace’s history with them goes back to their sponsorship of her local Bay Bullets team. Every time she runs out on court she hopes to make Bee (Hervey Bay Hotel & Resort owner) proud.

When Grace was 12 she got cast as an extra in a Pirates of the Caribbean movie but didn’t end up doing it because “I was scared and it was too far to travel”.